The 4 Reasons Why People Don’t Buy From You 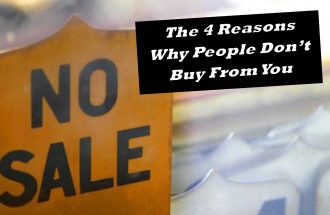 They wanted to do a whole bunch of different podcasts and I’m more than happy to do that and help out as I love working with so many of my clients.

I thought, after doing this podcast right now, what a great idea but for me to actually now have a bit of a chat with yourselves and just provide some more information and assistance.

So, what today’s podcast was actually about is the 4 main reasons why people don’t buy from you.

I get it all the time with people in the Allied Health industry, always come in to me and say, “Jason, I need more growth.”

And I’ll say, “What’s your biggest challenge? What are you wanting in your business right now?”

When you actually stop and have a look at it, the vast majority of time it’s not actually that you necessarily need more new leads.

We’re not always trying to just stuff more leads into the top of our funnel.

What we actually have to stop and do is we have to actually stop and have a think about all the people that already know you or the people that are already aware of what you do, who you are, what are some of the things you can do or assist them with.

But why aren’t they buying?

This is a really, really big one because let’s be honest… Let’s take social media. In social media, we go out there and we’ve got all of these different posts and strategies – and I’m not here today to debate what strategy, the right strategy or the wrong strategy.

But the challenge that we get is that you might end up doing something, let’s say, 1,000 see your post or you do a video, an information video.

You provide some type of value and that’s fantastic. That’s then seen by 1,000 people.

Rather than saying, “I need more patients. I need to grow more.” What we actually need to stop and do is realise, “Hey, you know what, why is it that only 2 people bought?”

A vast majority didn’t get engage and yet, they didn’t actually buy.

That doesn’t tell me that you necessarily need a whole lot of new leads. That actually tells me that you’re actually not converting your leads properly.

You’re not actually speaking the language that these people actually want you to speak.

You’re not getting the right call to action.

You’re not satisfying the criteria that they want for them to satisfy and buy from you.

So if 1,000 people are seeing something only 2 are buying or what I tend to say with a lot of clients in the health industry is 200 or 300 people will see your post, but majority of the time it’s not actually drawing any attention or any referrals.

And I totally understand. It’s about jab, jab, jab, hook like Gary Vaynerchuk. I totally get it.

Provide more value with no expectation of anything in return.

So here’s the thing. It’s not just about trying to stuff more people into your marketing funnel.

It’s actually you’ve got to stop and have a think about all the people that are already seeing you, know about you, etc.

There’s a load of people in your local area.

And sporting teams, for instance that aren’t buying from you.

And so, there are really four ways and I’m not going to go into massive detail today because we’re already going for multiple minutes on this and I just want to cut this really quick video.

And there are four reasons why they currently don’t.

First of all, there’s risk. It’s about the perceived risk that people have that something bad will happen if they engaged with your services.

If they pay you money, their hard-earned money, then what potentially is the down side?

Let’s say, you do dry needling or you’re an acupuncturist. They perceive that something bad is going to happen if they engage with getting needles stuck into them.

Let’s not get into the right and wrongs here, but hey, people think different things. So first one is risk.

Second one is friction. We all know how hard it is to change banks or to change insurance companies or electricity providers.

It’s a nightmare. It does you brain damage to try and get this changed. And so the second part of this is friction.

What are the friction points in your business that stop them from wanting to engage with you?

This could be lack of parking, for instance. They have to park 4 kilometers away and walk.

Maybe it’s a frictional point if they don’t have available appointments when they want them. It could be something like they really want 7:30 at night because they work in the city and they can’t get out because of traffic.

There’s a load of things around this frictional point.

But what is it?

There’s a lot of frictional points in all of our businesses and we are completely kidding ourselves if you think that you’ve got a really smooth frictionless system..

So you’ve got to be able to remove those friction points.

It basically works on the premise, “If I give my heard-earned money and my time to you, what is the certainty that I’m going to get my desired result?”

And so when we start to have a look at this… think about it, if they’re going to be in pain and they’re wanting treatment or they’re going to forego time with their family or leave work early, or something like that, to come and see you and spend an X amount of dollars, what is the certainty that I’m going to get the result that I want?

And so as a business owner, your job is to be able to satisfy that and squash that so that you’re not in the situation where they are trying to second guess whether you’re going to provide that success and the solution that they want.

Things like guarantees are really good ways that you can interject here to make sure that you can guarantee that they reach their end of journey, their finish line, for instance.

And that may not always be able to be done, so it’s not just going, “Oh, sweet. I’ll just do a quick guarantee and a 100% money back guarantee.”

There’s a lot of other things in place, so have a bit of a think about that.

There are so many easy and little simple things that you could put into your customer experience or to your sales pipeline and your conversion process to easily make sure that you’re giving them the certainty of success that they want from coming and seeing you in the first place.

The fourth one is I just call it the difference.

It’s really the difference that makes the difference. It’s pretty much, let’s be honest, you can go and see a physio or an EP or dietician, podiatrist, chiro, etc., and there’ll be 2 or 3 or 5 within a five-minute drive.

There are plenty of different options for them.

And that’s a massively important one.

It’s not a value for money thing. It’s about what is it that you’re going to do or give?

I’ll give you an example.

When I first started out many years ago, 15 or something years ago now – I was actually the first Exercise Physiologist in Australia to employ a physiotherapist when we put this clinic together.

And one of the biggest things that we worked out very quickly was that patients didn’t want to be on machine-based therapy, left to turn up the knob when it faded a little bit while I went and serviced another client was the type of mentality they wanted to avoid.

And so we found that out. We knew that.

The doctors didn’t like it either, so we actually put that in place. If you want physiotherapy over there, absolutely go and get that.

We will not leave you hooked up to machines to turn them up and down yourself while we see someone else and AKA make more money.

So if you want general physio type of thing over there, absolutely, you can get that there, but if you want this and only this, you got to come to us.

And so when we broke that down and we can phrase that and we can speak with emotion and say, “You get your own individual consult rooms.

“You’re with your therapist one on one.”

And so guys, there’s a really short snapshot of the four things that you need in your Allied Health business that are going to get more people to say yes.

Yeah, absolutely. You probably do, all right.

And there’s going to be a lot of low hanging fruit that you need to work on.

Stop and have a think about the hundreds of clients that aren’t actually clients – they’re prospects, in your area through sporting clubs, organisations, doctors that aren’t referring to you; family, friends.

The family and friends of the clients of yours that already know you, that you’re already doing marketing to.

So here’s the thing. It’s not always about trying to stuff more things into the top of your funnel.

It’s about finding out why.

And they’re the 4 reasons why the people that already know you aren’t buying from you.

So guys, here’s the thing. If you want a little cheat sheet, just hit me up with a quick message underneath and just download it and you guys can grab it.

I’ll give you some tips and some pointers on the 4 reasons – the risk, the friction, the certainty of success and the difference that makes the difference.

I’ll give that from me to you free.

Start to get those in place, because if you can answer those 4 questions which is actually really simple to do, then you start to 1) stand out from the crowd, 2) you give people absolutely no reason to buy.

There’s no risk, no friction.

You’re giving them maybe a niche-based environment or an opportunity or experience that they can’t get elsewhere.

And so all the people that already know you will start saying yes more often.

We’ve got to stop treating potential clients or prospects as stupid because they’re not.

They don’t want to be treated with that kind of disrespect.

We’re going to talk to them as they want to be spoken to and provide them with the solution that they want moving forward.

So guys, that’s all for me.

Hope that was beneficial, which I know it was.

There’s so much power in that for you guys to go and absolutely explode your patient growth with not having to spend crazy amounts of money on your marketing, leads and things like that.

Just go and fix your conversion.

The people that already know you, want to hear from you now.

They want to be sold based on what they want, not just your next marketing point.

So guys, go and grab the details down below.

I’m more than happy to help you guys out and there’s a massive amount of power for you guys to just absolutely explode this out of the park.

Right then and there are the 4 reasons why people aren’t buying from you that already know from you.

Enjoy it and I’ll talk to you guys soon.